The Unesco courier: a window open on the world, March 1989

The American poet-essayist Ralph Waldo Emerson once wrote that "Great geniuses have the shortest biographies". His compatriot and contemporary, James Russell Lowell, declared that the highest form ofgenius could be described as the voice that speaks "out of the eternal to the present". The great Persian lyric poet Hafez, the six hundredth anniversary of whose death we commemorate this year, qualifies as a genius on both these counts. We have only the sketchiest outline of his personal life, yet his poems speak to us across the centuries as though they were written yesterday.

Mihai Eminescu, the Romanian poet who died a hundred years ago, was a genius ofanother order. A true Romantic and an expert in folklore and comparative mythology, his writings express the genius, the spiritual embodiment ofan entire nation. The same might be said of the Rusalka Dnistrovaya, the "Mermaid of the Dniester", the first collection of Ukrainian literature to appear in the western Ukraine.

The third anniversary we salute in this issue, as a foretaste of a fuller treatment in our June number, is, of course, the bicentenary of the French Revolution. But when we speak of revolution today does the word have the same meaning for us as it did for the revolutionaries of two hundred years ago?

French revolutionary ideas have since been carried to the four corners of the world, just as for centuries both merchandise and ideas have flowed back and forth between Ea'st and West along the great cultural and commercial highway we call the Silk Road. As leisurely caravans plied from Changan to Istanbul, from Kashgar to Samarkand, Portuguese seafarers, too, were forging new links between East and West as they opened up the Spice Route, becoming in their travels the first Westerners to marvel at the sight of the Comoros, the "Islands of the Moon".

Today, sadly, the caravans and the caravels have been replaced by jet aircraft, giant trucks and fast cars. Trade in both goods and ideas between East and West may have expanded, but so too has the pollution associated with our energy-hungry industries and our modern "convenience" transport. 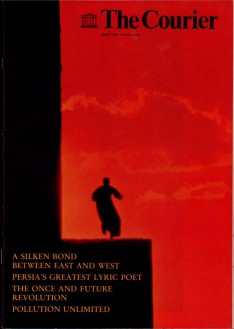