Unesco's action plan for the next 6 years: a course for the future

This issue of the Unesco Courier presents in highly condensed form Unesco's Medium-Term Plan for the years from 1984 to 1989. The Plan charts a general course for Unesco in these years and is not a direct and detailed programme of action.

Prepared on the basis of an analysis of current world problems, the Plan is structured, along intersectoral and hence interdisciplinary lines, around five missions which Unesco has undertaken to accomplish and which are in turn divided into fourteen major programmes.

The 'Medium-Term Plan, the second in Unesco's history, was drawn up by the DirectorGeneral, Mr. Amadou-Mahtar M'Bow, after an unprecedented survey carried out among Unesco's 158 Member States and after consultation with all those members of the secretariat who wished to put forward suggestions. It was then discussed and ratified by Unesco's Executive Board, before being amended and unanimously approved by an Extraordinary General Conference convened for this purpose and held at Unesco headquartersfrom 23 November to 3 December 1982.

On the following pages we present the main thrust of the fourteen major programmes which correspond to the missions Unesco has set out to fulfil.

An introductory article by Mr. M'Bow highlights different aspects ofthe Plan, afar-reaching document,which is of unquestioned importance to anyone wishing to understand the nature of Unesco's aims and activities. A table, printed as a pull-out insert, provides a synthesis of the Plan. 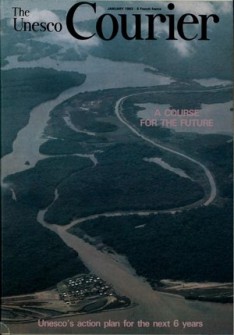