Todday Unesco possesses a home of its own in Paris, a headquarters commensurate 'with its needs and with the goals it has set itself. This is a building which rests on something more than its foundations of concrete for it harbours some of the noblest hopes of man.

The international character of its construction becomes visible the moment one crosses its threshold: the floor is of Norwegian quartzite, aluminium panels have come from Belgium, lighting equipment "was made in the United States and on the French-made glass doors are teak finger plates from Burma.

Architects from France, America, Italy, Brazil and Sweden conceived and carried out the plans or gave their help and advice. Industrial and technological skills from many countries were brought to bear on the construction and, as the buildings rose to join the Paris skyline, the tongues of many nations were heard among the workers and craftsmen on the site.

Within the large perimeter of this seven-and-a-half acre site there has been a harmonious blending of architecture and art. And like the architects, technicians, contractors and workmen, the painters and sculptors too are from many lands. They were born in places as far apart as Amsterdam and Santiago, Strasbourg and Philadelphia, and they include some of the best-known figures in contemporary art.

In building the new headquarters Unesco received unfailing help from its Member States. First and foremost came the contribution of the French Government which enabled Unesco to build its home on an attractive site in Paris. And throughout the buildings there is tangible proof of the generosity shown by other countries in the many and valuable gifts of furnishings and decorations.

Unesco House is far more than a collection of new forms and decorative details, a synthesis of 20th century artistic and architectural expression. It is above all a place in which to work. The design of the Secretariat building a "'three-pointed star*' which might lead one to suspect a formal aesthetic effort, is, in fact, completely functional. It is an architectural formula which has enabled communications within each department and between departments to be greatly shortened. The same concern for efficiency has determined the layout of the Conference building. The location of its committee rooms and offices and its lighting and acoustical arrangements should all make for good working conditions.

From a small flat in Grosvenor Square and two adjoining houses in Belgrave Square, London, where Unesco was founded 13 years ago, the Organization went to the Hotel Majestic in Paris. Here it continued to grow in strength and authority until the day when Member States decided that it could no longer be content with makeshift premises.

As the new headquarters was inaugurated on November 3, 1958, the measure of this growth and maturity was symbolized by the flags of Member States flying proudly from their 81 masts. 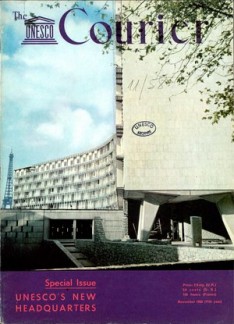