This year marks the fiftieth anniversary of the foundation of the United Nations. The occasion is not being celebrated in a notably festive atmosphere. One thinks of Somalia and Rwanda, and also, constantly, of Bosnia. But can these failures be blamed on the United Nations as such? If the UN did not exist, would the situation be better or worse?

in this issue, we review in a three-part dossier the questions that are quite rightly asked about the role and functions of the United Nations. The first part presents factual information about the UN system and how it works, and about important moments in its history. The second contains a critical analysis of the UN's achievements and failures in its three key areas of activity: peace-keeping, human rights and development. ln the third, Mr. Boutros Boutros. Ghali, Secretary. General of the United Nations, and Mr. Federico Mayor, Director-Genera) of UNESCO, set forth their views on future developments.

Many people have a persistent, nagging feeling of deep disappointment at the gap between what they would have liked to see and what has actually come to pass, especially since the fall of the Berlin Wall, the end of the bipolar world, and the concomitant assertion of demands for freedom, justice and solidarity.

This sense of disillusion is actually a promising sign, for it reveals the capital of hope which public opinion has invested in the United Nations. At the same time, it reflects misapprehensions about the machinery governing its workings. The way in which the system works is directly dependent on agreements and disagreements between its Member States, in other words between their governments-especially the most influential among them. What the United Nations system most cruelly lacks, and what explains the disappointments to which it gives rise, is an international consensus on the objectives and standards whereby the common interests of humanity can prevail over the spécifie interests of states or nations and ethnic or religious communities.

This consensus is still a distant prospect, but it will have to be reached sooner or later because it is so vital to the future of humanity and the planet. Who can doubt that when it is finally achieved its main architect will have been the United Nations system?

For all its defects, its unwieldiness and its mistakes, which mirror the imperfections of the international community itself, the United Nations has patiently authored a unique experiment in international relations and given rise to the feeling, amorphous though it may be, that in spite of everything the much-maligned skyscraper in New York is for ait of us an ultimate bastion against barbarism-a forum where we know that yesterday's enemies will be able to speak to each other tomorrow. 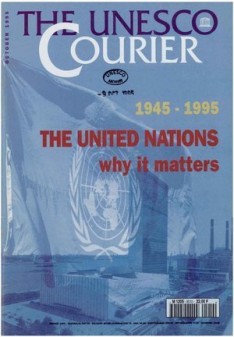