On 26 January 1788, a British fleet sailed into Sydney Cove, a small inlet on the east coast of Australia, and established a penal colony.

In the years that followed, what had been a place of exile for some of its first European inhabitants became a land of hope and potential. The discovery of gold in 1851 brought an influx of migrants that has continued ever since. "Living Together", the theme chosen by Australia to mark the bicentennial of European settlement, thus expresses an important aspiration for a country whose people from the Aborigines whose ancestors arrived some 40,000 years ago to the most recent newcomers are drawn from many different nations and ethnic groups.

Australia is a vast island-continent, equal in size to the United States without Alaska and Hawaii, and almost twice the combined areas of India and Pakistan. It is a nation of contrasts. Among the most sparsely populated, it is also one of the most urbanized, with most of the population living in cities and towns on the coastal fringes. Much of its development has been dominated by what a leading Australian historian has called "the tyranny of distance" the distance which isolated the country from the world outside and hampered communications within.

This may help to explain why so many original features of the land, life and culture of Australia have remained so little known and why many achievements by Australians have perhaps not always received the credit due to them internationally. In this issue of The UNESCO Courier, Australian contributors attempt to redress the balance by presenting some of the lesser-known aspects of their country's history, culture and science. 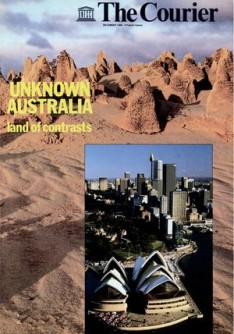