Victory in Nubia: the greatest archaeological rescue operation of all time

The history of mankind begins to unfold from the moment that men's memories, their hopes and doubts, take shape in stone or find expression in a mask or a musical rhythm. In defiance of death the message is passed down from generation to generation, spinning the long thread of historical continuity that enables nations to perpetuate their collective identity in the face of change.

The works that constitute the spiritual or material, the literary or artistic fabric of this continuity have thus, from earliest times, come to acquire inestimable value in the eyes of the peoples that created them. But only recently have they begun to be respected, studied and appreciated by the rest of the world.

Indeed, our generation is the first in history to perceive the totality of these works as an indivisible whole, each of them being considered as an integralpart of a single universal heritage.

The International Campaign to Save the Monuments of Nubia is a striking example of this new awareness. It has been marked throughout by a spirit of the widest possible co-operation and thus has attained all the objectives originally assigned to it. It will be numbered among the few major attempts made in our lifetime by the nations to assume their common responsibility towards the past so as to move forward in a spirit of brotherhood towards the future. 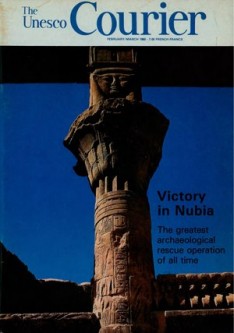