Violence today seems to be all around us. It is something we cannot ignore. Is it more widespread than it once was, or is it simply appearing in more blatant forms? Even if we are not directly confronted with violence it is impossible to shut our eyes and ears to its existence. If we are spared violence in our homes, it lies in wait for us elsewhere, when we take the subway, perhaps, or travel by air. We see it every day on the screen, in news and current affairs broadcasts and in fiction. We end up by expecting to encounter violence on every street corner.

Something in the terrible twilight of our century seems to call forth violence as inevitably as storm-clouds herald a storm. With the collapse of European communism, the balances that reposed on the East-West bipolar system have been upset. But when the great wind of freedom began to blow through the world, fear also began to spread, an insidious fear of the new, the unknown, the unexpected.

We live in a world in the throes of change, a world of multifarious possibilities, a world in which everything must be reinvented. But as things stand at present, not everyone has a chance to participate in this rebirth. The disparities are too great between those who can contribute to the forces of change and those who are condemned to passively endure their repercussions. The disinherited far outnumber the privileged, the powerful are infinitely stronger than the weak. Confronted with too many challenges at once, individuals, minorities and nations are tending to turn in upon themselves, to reject others and to reject change itself. Tensions, conflicts and rigidity seem to be reappearing, both in our personal lives and in the communities to which we belong.

Violence, then, is near at hand. Since it has existed since the dawn of history and is so deeply rooted in the unconscious, how could it fail to find, in the prevailing cli¬ mate of disarray, increasing opportunities to show its face and appear in new guises?

What are the origins of violence? Some scientists, and not the least distinguished, have suggested that the causes of violence are specifically biological a thesis which was convincingly rejected at a meeting of leading scholars held in Seville in 1986. Does violence have a socio-economic basis? Is it a consequence of the insoluble contradiction between individual and social experience? In what conditions does it cease to be latent and erupt? Do the mass media report it accurately or do they give overdue attention to it and make it worse?

These are some of the questions that are posed in this issue. Underlying them is a concern to know whether, and if so how, it is possible to respond to violence otherwise than by further violence. Some answers to these questions are to be found in ethics, in politics and in art. They are based on the imperative of respect for the person, for personal rights and freedoms, on a course of political action that looks to negotiation and not repression, and on a form of co-operation that everywhere honours justice and solidarity.

The task involved is immense and never-ending. It is more urgent than ever today. 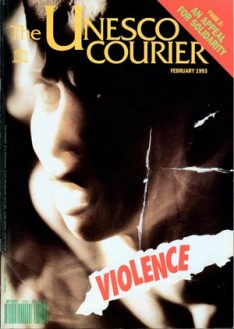