A Woman's life in an African village

No era in history perhaps has ever afforded more extreme contrasts than our own. Side by side with the modern towns now springing up throughout the immense continent of Africa, for example, the traditional Africa, little different from the one our grandparents pictured a century ago, continues to exist. Both live almost side by side and are different facets of the same reality of today.

In no way is Negro Africa's modernization more strikingly revealed than by the swift growth of an élite amongst women. These women are taking their place alongside a male élite, each year more numerous and more active. It is particularly in West Africa that the status of African women has changed most profoundly. On the Gold Coast, for example, women are today to be found in a great variety of professions. Considering that education 'for African women is such a recent thing, it is all the more remarkable to see them holding important positions as judges, lawyers, journalists and in the Civil Service.

The entry of women into so many new professions now has sociologists wondering what the consequences will ultimately be. In our society there are certain jobs which have now come to be associated with women rather than men (secretarial posts are an example).

In West Africa today some of these roles are being reversed. Up until now at any rate, men, not women, have been secretaries and typists, the girls apparently finding the door to these careers closed to them. On the other hand, they have found no difficulty in becoming printers or journalists, and even monopolize certain fields of medicine.

Of course the women of Africa have not waited to be "educated" in order to play a role in society. They have always been extremely influential, and in some regions enjoyed the greatest independence. In West Africa, married women have been traders in their own right for many centuries, and have disposed of their earnings as they pleased.

The present industrialization of Africa has been an opportunity for some enterprising women even though illiterateto go into business on a big scale. Thus, in Nigeria there are business women who run chains of shops and are rich enough to build modern homes and to send their children to England or the United States. Some cities have a growing "smart set" of elegant women who set the fashion.

But behind this new A'frica there is still the old one with its polygamous families, its minor rulers and its sorcerers. Between the two Áfricas there is no hostility. The women who have grown up according to the traditional customs point to the girl "intellectuals" and say: "Now our daughters are showing us the way." 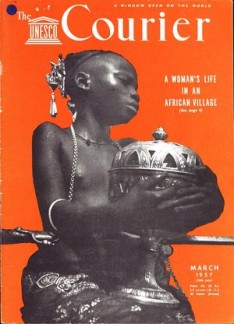