The World of the peasant

Our purpose in devoting this issue of the Unesco Courier to The World of the Peasant is to draw attention to a situation which, throughout the world, is far from satisfactory. Almost everywhere, more and more workers are leaving the land, and, in many countries, notably in the Third World, the conditions of those who remain are seriously deteriorating.

In the industrialized countries, mechanization of agriculture and the introduction of intensive farming methods have necessitated a regrouping of agricultural land and (except in the socialist countries) heavyprivate capital investment. In spite of accumulating enormous debts, the smallfarmers have been unable to keep up with these changes and have been obliged to sell their lands and move to the towns.

The situation is somewhat different in the Third World countries. There the peasants are above all victims of the big transnational agro-businesses which, guided essentially by the laws ofprofit, control the national and international markets and introduce monocultures and set in motion "green revolutions" as they seefit. Millions of small farmers have thus been forced to move either to the urban agglomerations where, crowded into shanty-towns, they are reduced to the condition of a subproletariat, or to the marginal lands of the mountain slopes where, in their struggle to eke out a bare subsistence, they have, in spite of themselves, contributed to the deforestation and erosion ofthe land and to the spread of desertification. Nevertheless, deforestation is in major part due to the reckless exploitation of the forests by big companies. In the countries of the Sahel, desertification is becoming a catastrophe of continental proportions. Thus, in many parts of the globe, there are an increasing number of disaster areas of which the peasants are the primary victims.

This forced and ever increasing uprooting ofthose who work on the land is not only a human tragedy, it also involves the irretrievable loss ofthe culture which is their birthright. And this ancient and precious culture must be preserved, indeed developed, for it is still a vital force, as witness the works being created today by the peasants of Haiti, the Andean regions and China.

The situation ofthe world's peasants will improve when they are more fully integrated, both economically and culturally, into national life; when they have at their disposal the scientific and technological means to increase the yield of their lands; when the problems ofthe disaster areas are systematically tackled and the international community devotes to them the necessary efforts and resources; and, finally and above all, the principles on which the world's international markets are based are altered to meet the imperatives of equity and justice. 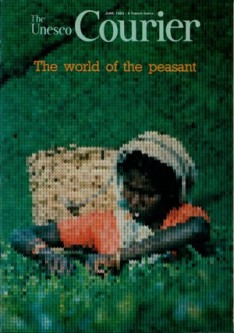